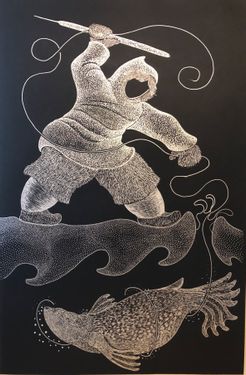 Following on the success of the world's first all-night festival of Inuit art, music, dance, performance, installation, food and film held during the 20th Inuit studies conference in St. John's NL, We are excited to share the next instalment of this exciting series, the iNuit Blanche Gallery Crawl which will take place on the evening of October 3rd, 2019 in Tio'tia:ke (Montreal, QC).

The iNuit blanche gallery crawl is organized by the 7-year SSHRC Partnership Grant, the Inuit Futures in Arts Leadership: The Pilimmaksarniq/Pijariuqsarniq Project. Presented in association with the 21st Inuit Studies Conference at the Université du Québec à Montréal, downtown Montreal will be transformed for one evening by this multi-site festival which will feature exhibitions and performances by Inuit artists (and their collaborators) from across Inuit Nunangat in Montreal’s museums and galleries. Learn more at inuitblanche.com