Thème:
Identité
Quoi:
Panel
Quand:
2:30 PM, samedi 5 oct. 2019 (3 heures 15 minutes)
Pauses:
Pause café   04:00 PM à 04:15 PM (15 minutes)
Où:
Pavillon Sherbrooke (SH) - SH-3260
Comment:
Voices of Inuit are often lost in academic conferences, as Inuit have a long history of being the subject at such events. Further to this, urban Inuit are generally not thought of or included. For this reason, we would like to have an all-Inuit panel, that focuses on urban Inuit voices. There is an estimated 27\% of Inuit living

outside of Inuit Nunangat, with major cities in the south having populations comparable or larger than that of many communities in the north. This migration, that will accentuate over the years, is caused by numerous factors, such as better access to health care, better job opportunities, desire to pursue higher education, or escaping economic and social issues, such as overcrowding, lack of housing, violence and high cost of living. A certain proportion of the population is also composed of people born and raised outside of Inuit Nunangat, some of which have never been up North. The urban community experiences different realities, but shares similar issues: being invisible to southern and northern authorities because of political and structural factors, a situation that causes many challenges. We propose a half-day panel to discuss urban Inuit realities. Themes such as identity, cultural loss and revitalization, representation and community organization will be touched upon. Each participant will have the opportunity to give their perspective about the themes and answer questions. 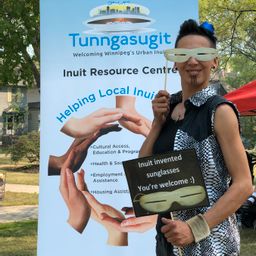