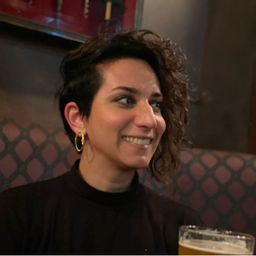 Banafsheh Mohammadi is a PhD candidate and Killam laureate in the Department of Art and Design at the University of Alberta. She specializes in the history and theory of 20th-century architecture and religious studies. Her multidisciplinary doctoral research explores the petroleum-based aesthetics that emerged during the 1940s and 1950s in the United States through the work of architectural historians Joseph Rykwert and Vincent Scully and historians of religion Henry Corbin and Mircea Eliade.

Banafsheh’s larger research and teaching interests include the philosophy of architecture and ecological and postcolonial critique. Her book, the Farsi translation of The Ethical Function of Architecture (Karsten Harries) is published by Nashre-No in Iran, and she is currently working on the Farsi translation of Disfiguring: Art, Architecture, Religion (Mark C. Taylor). Her latest article will be published in September 2022 issue of the Journal of the Society of Architectural Historians.