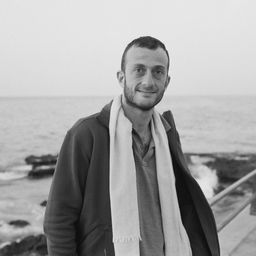 Université Paris IV Sorbonne
Participe à 1 Session
Gregory Buchakjian (b. 1971) is a Beirut based art historian and photographer. Faculty at Académie Libanaise des Beaux-Arts (ALBA), he co-founded, with Pierre Hage-Boutros and Rana Haddad, Atelier de Recherche ALBA (1997-2004), a transdisciplinary platform that triggered public interventions in issues such as memory and space appropriation. He is currently PhD candidate at Université Paris IV Sorbonne for a dissertation dedicated to the uses and transformations of abandoned dwellings in Beirut.

His personal work deals with the city and its history through multiple scopes including writing (Halte, 2005), installation (Leningrad, 2013), animation film (What, shoes?, 2006) and most notably, photography. After the 2006 war in Lebanon, his camera turned towards dark colored and gloomy images of decadent parties during which young Lebanese were trying to escape from social instability and political turmoil. Entitled Nighthawks, the series was exhibited in Beirut (Comme des Garçons, 2008) and was part of the Noorderlicht Photofestival (Groningen, Netherlands, 2011). Since 2009, he is exploring derelict dwellings in Beirut. This long-term photographic project that involves mapping, architectural exploration, archive collecting and narratives generated the subject of the Phd research.

He is member of the advisory committee of the Saradar Collection. He took part in many academic and artistic juries including the Boghossian Prize (2012) and Beirut Art Center’s Exposure (2013).